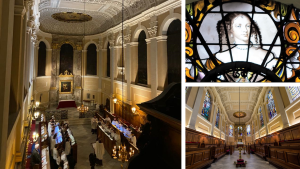 A Choral Evensong in honour of “Portugal Restoration of Independence Day” took place at The Queen’s College Chapel, University of Oxford, on 1 December 2022.  The event was livestreamed and can be watched on Portugal-Uk 650 youtube channel. The music performed by the Choir of the The Queen’s College Oxford directed by Professor Owen Rees, Artistic Director of Portugal-Uk 650  included jewels of Portuguese and English music from the time of the Restoration. Professor Thomas Earle, Emeritus King John II Professor of Portuguese Studies at the University of Oxford, read a lesson in Portuguese. The service was lead by Rev Katherine Price, Chaplain of The Queen’s College Oxford who spoke about the historical links of the College to the Anglo-Portuguese Alliance. Queen Catherine of Braganza, daughter of King Joao IV who was main protagonist of the Restoration of the Independence of Portugal, was a Patron of The Queen’s College and there is a beautiful stained glass window of her in the Upper Library of the College. Besides, the founder of The Queen’s College, Queen Philippa of Hailnaut was the wife of King Edward III who signed the “Treaty of Peace, Friendship and Alliace” on 16 June 1373 with King Fernando I of Portugal.  Choral Evensong was followed by a Port Wine Reception at the beautiful wood paneled Magrath Room at The Queen’s College.  This event counted with the support of The Camoes Institute, Ministry of Foreign Affairs of Portugal and the Embassy of Portugal in the United Kingdom.