“Music for Restored Times”, Chapel of The Queen’s College Oxford

This concerts features music at the English Royal Court from the time of Queen Catherine of Braganza and her husband King Charles II. Hear some jewels of the English Restoration School repertoire. The concert features verse anthems by John Blow, Henry Cooke and Henry Purcell, as well as Pelham Humfrey, Matthew Locke and Michael Wise. Singers from across the choir will perform solo verses, which alternate with passages for full choir, much akin to the operation of the seventeenth-century Chapel Royal.

Tickets cost 20 for general public and 5GBP for students. You can buy tickets  here. 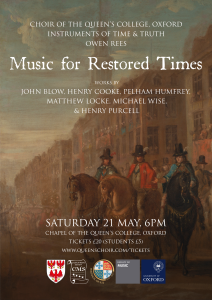