What happens when we join a literature classic and a game? “MacBad” is the third project in a series of performances by Teatro Praga dedicated to children, inspired by the masterpieces of English playwright William Shakespeare. This time, with a modern interpretation of one of Shakespeare’s most famous plays – Macbeth – the “Scottish play” whose most remarkable features are the presence of a trio of witches and their prophecies, which the hero/villain Macbeth (who in our title is called MacBad, thus becoming the real Bad Guy!) will inevitably fulfil, even when he tries to escape them. The spectator/protagonist is thus a gamer who ensures that the story comes to an end. And for this end to be fulfilled, the show will resort to mechanisms inspired in systems of famous “role-playing” games like Dungeons & Dragons and Game Centers. There will be several games within the game and everything will converge so that the prophecies, despite everything, will come true. 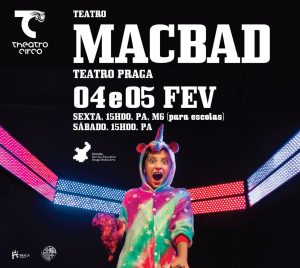