“650th anniversary of the Anglo-Portuguese Alliance. Taking Stock of Past and Envisioning the Future”, 6-9 Julho de 2022, University of Minho, Braga, Portugal.

The legal foundations of the Anglo-Portuguese alliance are found in three treaties dating from the fourteenth century: the Treaty of Tagilde (10 July 1372), the Treaty of London (16 June 1373), and the Treaty of Windsor (9 May 1386).

The Treaty of Tagilde, signed at the Church of São Salvador of Tagilde (Vizela municipality, Braga district), by D. Ferdinand I of Portugal and the representatives of John of Gaunt, Duke of Lancaster and son of Edward III of England, is considered the preamble of the alliance that remains in force to this day. During more than six centuries of existence, the Anglo-Portuguese alliance has survived the most challenging of historical contingencies, including two world wars, the rise and fall of empires, revolution and decolonisation, the multilateralization of international relations, European integration and the end of the Cold War.

Today, in a context shaped by Brexit, the Interdisciplinary Conference “The Anglo-Portuguese Alliance: Taking Stock of the Past and Envisioning the Future”, which will take place at the University of Minho (Braga, Portugal) from 6 to 9 July 2022, marks the 650th anniversary of the Treaty of Tagilde with a creative space for dialogue and exchange of knowledge among researchers from different areas of knowledge. The conference aims to bring about a deeper understanding of the Anglo-Portuguese alliance, its past and present, and reflect on possible future reverberations.

The Conference is organised by the Research Centre for Justice and Governance and the School of Law of the University of Minho, in partnerhsip with Portugal-UK 650. 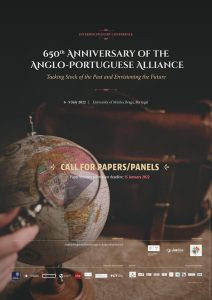