Commemorative lunch to mark the 650 years of the Anglo-Portuguese Treaty of Tagilde, with wine tasting and masterclass of Portuguese Wines, The Queen’s College Oxford.

On the 1st of December, day of the Restoration of the Independence of Portugal, we are organizing at Oxford, a lunch to mark the 650th anniversary of the Anglo-Portuguese Treaty of Tagilde, that was signed on 10 July 1372 and ratified in London in November 1372. This treaty led to the Treaty of Peace, Friendship and Alliance signed on 16 June 1373 at St Paul’s Cathedral in London, that formalized the beginning of the Anglo-Portuguese Alliance.

This lunch includes a masterclass about Portuguese Wines by the Master of Wine Dirceu Vianna Jr and takes place at the The Queen’s College, University of Oxford. This College has several historical relations to Portugal. Queen’s Catherine of Bragança Patron of this College, was the daughter of King John VI the main protagonist of the restoration and there is a beautiful glass window in this College library of The Queen. On the other hand Queen Philippa of Hainault, foundress of The Queen’s College, was the wife of King Edward III  was the wife of King Edward III who initiated the Anglo-Portuguese Alliance, and mother of John of Gaunt, Duke of Lancaster who signed the Treaty of Tagilde.

This event is organised in partnership with the Queen’s College and Wines of Portugal. 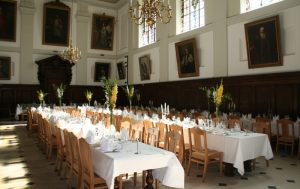